More than a quarter of motorists passing through the village on the A372 exceed our 30mph limit, some by significant amounts.


On an average day in the 10 people are killed on the roads, and significant number of those casualties are pedestrians. Excessive speed is a contributory factor in 25% of all road deaths. There are approximately 800,000 reported road casualties each year with many, less serious injuries not being reported. Speeding motorists cost the health services, in excess of £19 million per annum in this force area alone.

Speeding is not only a problem in towns and cities. The incidence of speeding in rural areas is a major factor in preventing people from enjoying their environment, however, motorists who speed through villages are very often unaware of the impact of their actions on residents, or the danger they pose to other road users and pedestrians

In 2000 the Department for Transport in 2000 announced targets reduce the number of people killed or seriously injured in road collisions by 2010, including a 50% reduction in the number of children killed or injured. Following this, and Somerset Constabulary introduced the Community Speed Watch (CSW) Scheme in 2001.

CSW gives local people the ability to actively get involved in road safety, and there are currently in excess of 100 CSW schemes successfully running within the Avon and Somerset area. It is a partnership between the Community, Devon and Somerset Fire and Rescue, Safer Stronger Neighbourhoods PACT, (Partners and Communities Together), Somerset Road Safety Partnership, and West of England Road Safety Partnership with an aim to tackle the problem of speeding motorists, therefore improving the quality of life of the local residents.


The aim is to discourage drivers and motorcyclists from driving faster than the set speed limit, and to achieve a reduction in the number of speeding motorists.

A Speed Watch consists of local residents, who are willing to volunteer a small amount of time each week to monitor speeds with speed detection equipment. All volunteers have been trained by the police in the use of speed monitoring equipment, and they are supported by local beat managers, special constables and the Roads Policing Unit (RPU).
Schemes can only operate in areas governed by a 30 or 40 mph speed limit, and where a risk assessment has indicated that the location is safe and suitable. 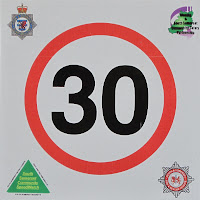 High profile monitoring of vehicle speed is backed up by issuing warning letters to errant drivers and, where applicable, enforcement action by police officers. One driver recorded as speeding by a CSW team wrote the following to the Western Gazette 26 May 11

As part of the initiative, residents in Aller have been issued with stickers to apply to their wheelie or recycling bins as a weekly reminder to drivers of the speed limit through the village.

To get one of these stickers, or for more information on how to become a Community Speed Watch volunteer, please contact Judith Bailey on 01458 252696 or email jandj88@btinternet.com.